A gold medal that flew aboard the Apollo 11 mission to the Moon with Neil Armstrong has sold for $2,055,000 by Dallas-based Heritage Auctions.

Unusually, the medal features an early design for the Apollo 11 mission insignia that was created by crewmember Michael Collins.

“The obverse depicts Collins’ early and original concept for the mission insignia with the eagle carrying an olive branch in its mouth,” explains Heritage Auctions, on its website. “NASA thought the sharp, open talons of the eagle looked too “warlike” and the olive branch, representing peace, was moved to the claws. This is one of, if not the only, major official items that renders the insignia as it was meant to be by the astronaut designer.”

The mission, dates, and surnames of the Apollo 11 crew are featured on the reverse of the medal. Only three of the medals were minted – one for each of the mission’s crewmembers.

The medal features the original concept for the Apollo mission insignia. (Heritage Auctions)

The 28-mm solid gold Robbins Medal had been part of the Armstrong Family Collection and had a pre-sale estimate of $100,000.

Minted by the Robbins Company of Attleboro, Mass., the tradition of commemorative Apollo medallions began with Apollo 7 astronaut Walt Cunningham, who wanted a commemorative memento to take into space. The Smithsonian notes that the medals could be purchased through the NASA astronaut office.

Other items in the auction included Neil Armstrong’s childhood teddy bear, which sold for $3,500, just above its pre-sale estimate of $3,000.

APOLLO 11: SECRET NIXON SPEECH REVEALS WHAT WOULD HAPPEN IF ARMSTRONG AND ALDRIN COULDN’T COME BACK

July 20 marks the 50th anniversary of the Apollo 11 Moon landing and the historic mission continues to be a source of fascination. 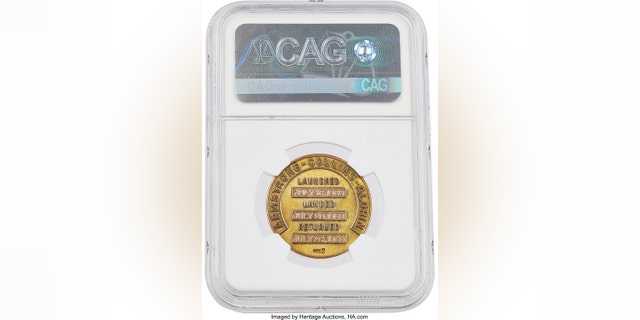 Only three of the 28-mm solid gold Robbins medals were minted. (Heritage Auctions)

An Apollo 11 Lunar Module Timeline Book that traveled to the Moon with Buzz Aldrin and Armstrong in the Eagle lander is the centerpiece of a Christie’s auction on July 18. The Timeline Book has a pre-sale estimate of $7 million to $9 million.

A rare signed photo of Apollo 11 astronaut Armstrong making his ‘giant leap for mankind’ was recently sold in a separate auction for $52,247.

Last year, a checklist that traveled to the surface of the Moon with Armstrong and Aldrin sold at auction in New York for $62,500. 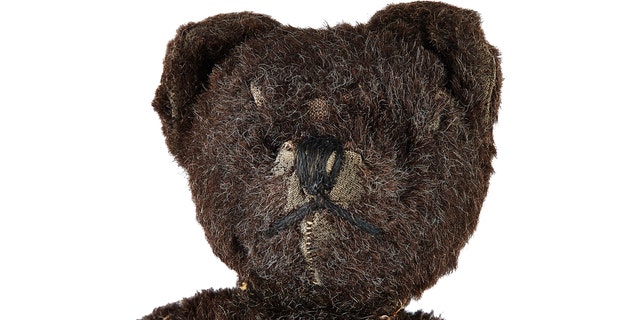 In 2017, a bag containing Moondust filled by Armstrong was sold by Sotheby’s for $1.8 million.

The bag previously had been misidentified and mistakenly sold at an online government auction for $995. The Chicago-area woman who purchased the bag won an intense court battle with NASA, which attempted to retrieve the artifact.

Collins, who was the Command Module pilot on Apollo 11, recently revealed a previously unseen photo of the famous Moon landing crew members that he “found at the bottom of a box.”

Be sure to catch the America’s News HQ Apollo 11 50th anniversary special on Fox News on Saturday, July 20 at 12 PM EST.