The Lunar Module Timeline Book that traveled to the Moon with Apollo 11 astronauts Neil Armstrong and Buzz Aldrin is up for auction later this week.

The book, which was used to navigate the Eagle lunar module to the surface of the Moon, contains nearly 150 handwritten annotations by the astronauts as well as possible traces of moondust.

“It’s the book that landed man on the Moon — this is no exaggeration,” Christina Geiger, Christie’s head of department for books and manuscripts, told Fox News. “It’s essentially the features’ manual that was used by Neil Armstrong and Buzz Aldrin in real time for the entire voyage of the Eagle.”

APOLLO ASTRONAUT RECOUNTS MISSION CONTROL DURING MOON LANDING: ‘IT WAS TENSE, BECAUSE THIS WAS THE REAL THING NOW’

The book also contains the first human writing on another world — a set of coordinates written by Buzz Aldrin shortly after the Eagle landed on the lunar surface.

The book has a pre-sale estimate of $7 million to $9 million.
(Fox News)

The historic item, which will be auctioned by Christie’s on July 18, has a pre-sale estimate of between $7 million and $9 million.

July 20 marks the 50th anniversary of the Apollo 11 Moon landing.

APOLLO 11 ARTIFACTS OWNED BY BUZZ ALDRIN UP FOR AUCTION

The historic mission continues to be a source of fascination. A number of Apollo 11 artifacts that were owned by Buzz Aldrin are also up for auction at Sotheby’s later this month. The Apollo 11 lunar module pilot, who is 89 years old, has consigned 11 items for auction, which include pages from the mission’s flown flight plan and flown data file. 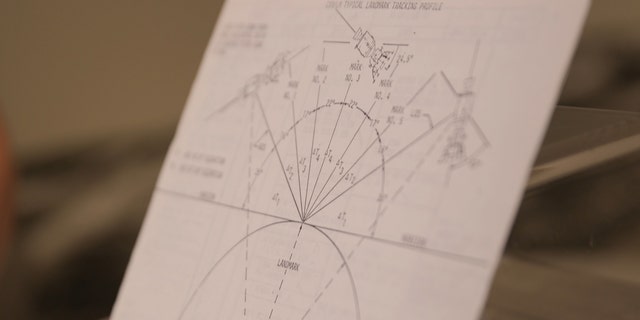 Additionally, a set of original videotape recordings of the Apollo 11 Moon landing – bought for $217.77 at a government surplus auction by a former NASA intern in the 1970s – could raise up to $2 million when they are auctioned by Sotheby’s on July 20.

And a preliminary flight plan and a NASA memo discussing Armstrong’s historic first words on the Moon are among a host of artifacts from the historic Apollo 11 mission that will be auctioned by Dallas-based Heritage Auctions from July 16 to 18.

A rare signed photo of Apollo 11 astronaut Armstrong making his ‘giant leap for mankind’ was recently sold in a separate auction for $52,247.

Last year, a checklist that traveled to the surface of the Moon with Armstrong and Aldrin sold at auction in New York for $62,500.

In 2017, a bag containing Moondust filled by Armstrong was sold by Sotheby’s for $1.8 million.

The bag previously had been misidentified and mistakenly sold at an online government auction for $995. The Chicago-area woman who purchased the bag won an intense court battle with NASA, which attempted to retrieve the artifact.

Apollo 11 astronaut Michael Collins recently revealed a previously unseen photo of the famous Moon landing crew members that he “found at the bottom of a box.”