By Ian Randall For Mailonline

The Draconid meteor shower will continue to be visible from across the US and the UK tonight and will continue on until Thursday.

The light show is made by tiny meteors — fragments of an icy comet that breaks up as its orbit brings it close to the Sun — burning up as they enter Earth’s atmosphere.

Although the shower was at its most intense last night, the meteors will continue to shoot across the sky until Thursday October 10.

The display will be most visible in the Northern Hemisphere and is best viewed shortly after dusk, in clear skies and away from sources of light pollution.

Scroll down for video 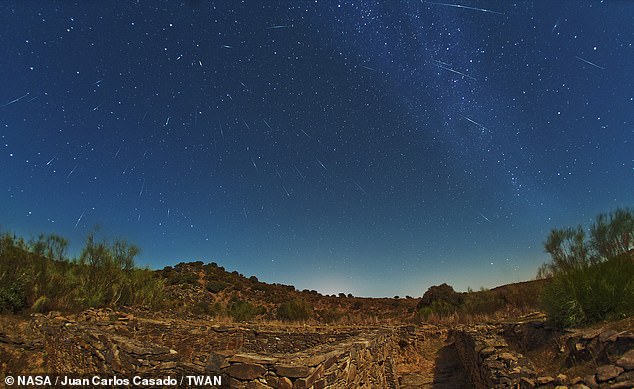 The Draconid meteor shower, pictured here in 2011 over Spain, will continue to be visible this year from across the US and the UK tonight and will continue on until Thursday

The October Draconids are meteor showers emitted from the break-up of the comet Comet Giacobini–Zinner, which lays down filaments of debris every 6.6 years as it passes on its orbit through the inner solar system.

Meteors — commonly dubbed ‘shooting stars’ — occurs as the Earth’s orbit brings it through this debris field.

‘Most years, we pass through gaps between filaments, maybe just grazing one or two as we go by,’ explained Bill Cooke of NASA’s Meteoroid Environment Office.

‘Occasionally, though, we hit one nearly head on — and the fireworks begin.’

As the meteors made of ice and dust enter our atmosphere, they begin to burn up — putting on a light show for viewers but meaning that most never reach the ground.

The shower takes its name from the constellation of Draco, from where in the night sky they seem to originate, which can be spotted lying above the Big Dipper and Polaris, the North Star.

The Draconids are best viewed from the Northern Hemisphere in the early evening — just a few hours after dusk  (18:00 in the UK, 18:30 in the US) — in clear skies and far from sources of light pollution like big cities.

The best places to see meteors — and many other astronomical phenomena — are so called ‘dark sky preserves’, which include the UK’s Brecon Beacons and Exmoor and Galloway Forest national parks.

‘When you observe meteor showers, you want to lie flat on your back and use your eyes,’ Dr Cooke told NBC News.

‘You want to see as much of the sky as possible.’ 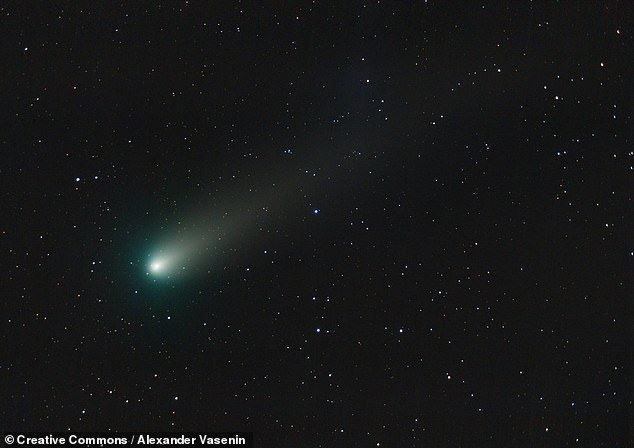 The light show is made by tiny meteors — fragments of an icy comet, pictured, that breaks up as its orbit brings it close to the Sun — burning up as they enter Earth’s atmosphere

However, the event may be more difficult to watch this year, with the nearly-full moon rendering all but the brightest meteors invisible to the naked eye.

‘Normally the country is where you want to go to observe meteors — good, dark sky. But the moonlight is really going to interfere this year,’ Cooke added.

‘This is not going to be like the Perseids, which knock your eyes out.’

In addition, this year experts predict that the shower will only generate around five–eight meteors per hour — although there is the possibly that an outburst could occur, which would see the rate spike to around 100 each hour

The size of the shower is dependant on the nature Earth’s passage through the comet’s debris-filled wake — with greater levels of activity occurring when traversing denser parts of the stream.

The shower takes its name from the constellation of Draco, from where in the night sky they seem to originate, which can be spotted lying above the Big Dipper and Polaris, the North Star

Thousands of meteors were seen each hour from the Draconids in 1933 and 1946, for example, a spectacle that astronomers placed among the most impressive meteor storms of the 20th Century.

Normally, however, the Draconids put on a relatively modest display in comparison to other periodic meteor showers.

‘The most important thing you need to know about the Draconids is that they are kind of an all-or-nothing meteor shower,’ Dr Cooke added.

‘They either produce spectacular outbursts or meteor storms, or you would never know they were there.’

WHAT OTHER MAJOR METEOR SHOWERS ARE UPCOMING?

2020 Chevrolet Corvette Stingray Review: A Mid-Engine Marvel That Won't Tear Your Face Off (Yet) – The Drive