An eagle-eyed amateur sleuth has helped NASA locate the debris of India’s Vikram lander, which crashed into the Moon in September.

In a statement, NASA explained that its Lunar Reconnaissance Orbiter captured footage of the crash site on Sept. 17, which was released on Sept. 27. It was then downloaded by a number of people searching for signs of the ill-fated lander.

One person who carefully trawled through the images was Shanmuga Subramanian, who works as an IT professional in Chennai, India, according to the Times of India. His keen analysis of the images successfully identified the Vikram wreckage, according to the U.S. space agency.

The Indian Space Research Organization lost contact with the unmanned probe when it was in the final stage of an audacious Moon landing attempt on Sept. 6, just 1.3 miles from the lunar surface.

“Shanmuga Subramanian contacted the LRO project with a positive identification of debris,” said NASA in the statement. “After receiving this tip, the LROC team confirmed the identification by comparing before and after images.”

VIKRAM MOON LANDER: TIME IS RUNNING OUT FOR SCIENTISTS TO MAKE CONTACT WITH PROBE 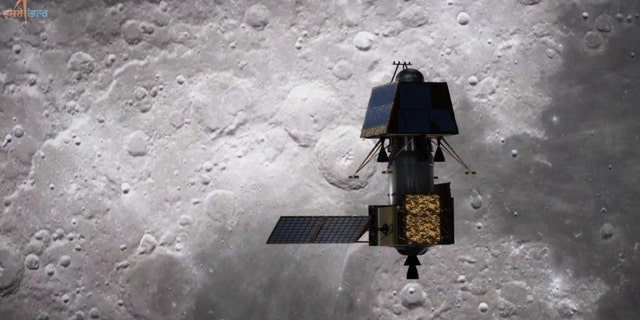 The space agency explained that the debris first spotted by Subramanian is about 2,461 feet (750 meters) northwest of the main crash site.

ISRO also reported that Vikram wreckage was spotted on the lunar surface by the space agency’s Chandrayaan-2 orbiter. The Chandrayaan-2 spacecraft carrying the Vikram Lander launched from Sriharikota in southern India on July 22.

Only the U.S., Russia and China have successfully completed “soft landings” on the Moon.

The Moon looms large in America’s space future. NASA’s Artemis program aims to land American astronauts, including the first woman, on the lunar surface by 2024 and establish a sustainable human presence on Earth’s natural satellite.

Earlier this year, NASA released details of its vision for the Artemis Moon lander that will return U.S. astronauts to the lunar surface.

In October, NASA also unveiled its plan to send a new lunar rover, VIPER, to the surface of the Moon.