When volcanoes erupt, people in the area are usually preoccupied with the usual threats like lava flows or ash and debris blasted from the cone.

Occasionally, however, eruptions can produce a few eye-catching wrinkles like the image below: A floating ‘island’ made up of volcanic rock, meandering through the Pacific.

It is, indeed, floating, and the explanation is not science fiction. The countless rocks that make it up are pumice, which begins as super-heated rock ejected during eruptions. As it rapidly cools, air bubbles are trapped within, often making it light enough to float on water.

This particular ‘island’ was detected earlier in August, and the image up above was captured by NASA’s Landsat 8 satellite on August 13. It was first reported by sailors on August 7, and one craft, the catamaran Roam, actually sailed near enough to it on August 15 to take some samples.

The crew described a “rubble slick made up of rocks from marble to
basketball size such that water was not visible,” as well as the smell of sulphur (you can read their account here).

It’s not clear where the rubble came from. There are several volcanoes in the area, in the waters off the archipelagic Kingdom of Tonga, and NASA says the evidence points to an unnamed underwater volcano as the possible source (citing volcanologists at the Smithsonian Institute).

Though it appears as a solid shape from orbit (and an enormous one, about the size of Manhattan), its nature as a cluster of numerous small-to-medium-sized rocks means it wouldn’t be able to support the weight of a person. 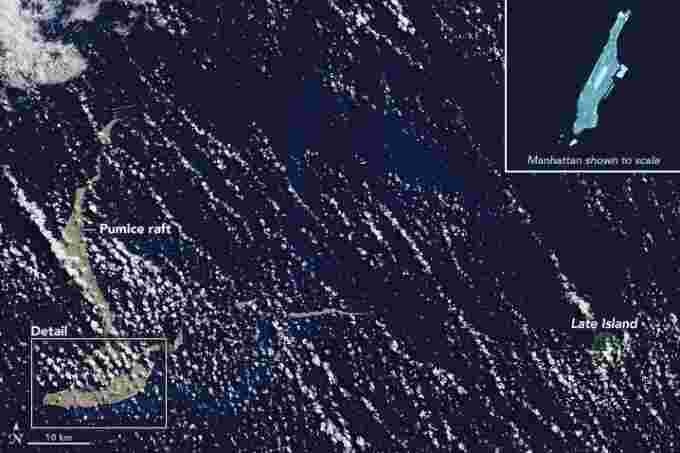 That rules it out as a potential holiday spot, but the nutrient-rich raft is a boon for life in the area.

As such, the raft may turn out to be a stroke of luck for Australia’s Great Barrier Reef, in whose general direction the raft is floating. Marine heatwaves in recent year have devasted the organisms that make up the corals of the Great Barrier Reef and other such reefs, and Queensland University of Technology Professor Scott Bryan told ABC the raft’s arrival in the next 12 months will be a big help in its recovery.

“We’re going to have millions of individual corals and lots of other organisms all coming in together with the potential of finding new homes along our coastline,” Bryan told the broadcaster.

Apple’s next cheaper iPhone is expected to keep a design similar to the iPhone 8.&nb…