American aerospace engineer John Houbolt as he stands at a chalkboard in July 1962 showing his lunar orbit rendezvous plan for landing astronauts on the moon.

The Apollo program conjures images of Neil Armstrong’s first steps on the moon and the massive team effort involved in getting him there. But a fundamental decision that led to the successful lunar landings came largely as a result of one man’s determination to buck the system at NASA.

That man was John C. Houbolt.

Houbolt’s vision of how to get to the moon prevailed over ideas pushed by NASA’s heaviest hitters, including the German-born rocket scientist Wernher von Braun, who designed the Saturn V, and Max Faget, an émigré from British Honduras who was responsible for the Mercury capsule that put the first Americans into space.

In April 1961, President John F. Kennedy had energized America’s space program by pledging to send “a man to the moon and [return] him safely to the Earth” before the end of the 1960s. But at NASA, a fundamental question first had to be answered: What was the exact mode for getting to the moon? Without knowing that, it was impossible to even begin designing the machines to go there.

In the late 1950s, before America had even put a man into space, NASA was already thinking about what it would take to put astronauts on the moon. But there was no broad agreement. Three main camps, which quickly grew into factions, backed different solutions.

A heated behind-the-scenes debate ensued, with many of the space agency’s engineers drawn to what seemed like the most obvious approach — a plan known as direct ascent. 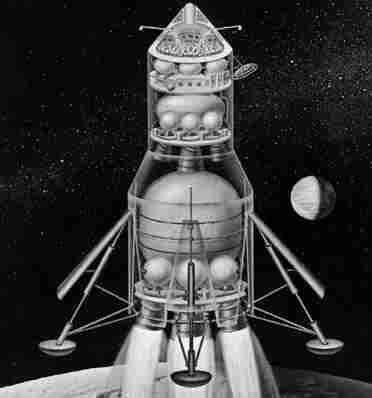 An early NASA concept for a lunar landing using the direct ascent method.

Think pre-Apollo concepts of space travel: a rocket launches from Earth, shoots directly to the moon and then lands, carrying with it all the fuel and supplies needed to get there and back home.

“Most people wanted to just build a big rocket and stack it up and send it all to the moon,” says Roger Launius, a former NASA chief historian and senior curator at the Smithsonian Air and Space Museum.

But direct ascent required an enormous vehicle to make the lunar landing, something that might have been 50 feet or more in height and extremely precarious to land. A huge new rocket, the Nova — even bigger than the already titanic Saturn V — would be needed just to lift such a beast into Earth orbit. The Nova was still on the drawing board, and even von Braun had his doubts about its feasibility and how quickly it could be ready to fly. 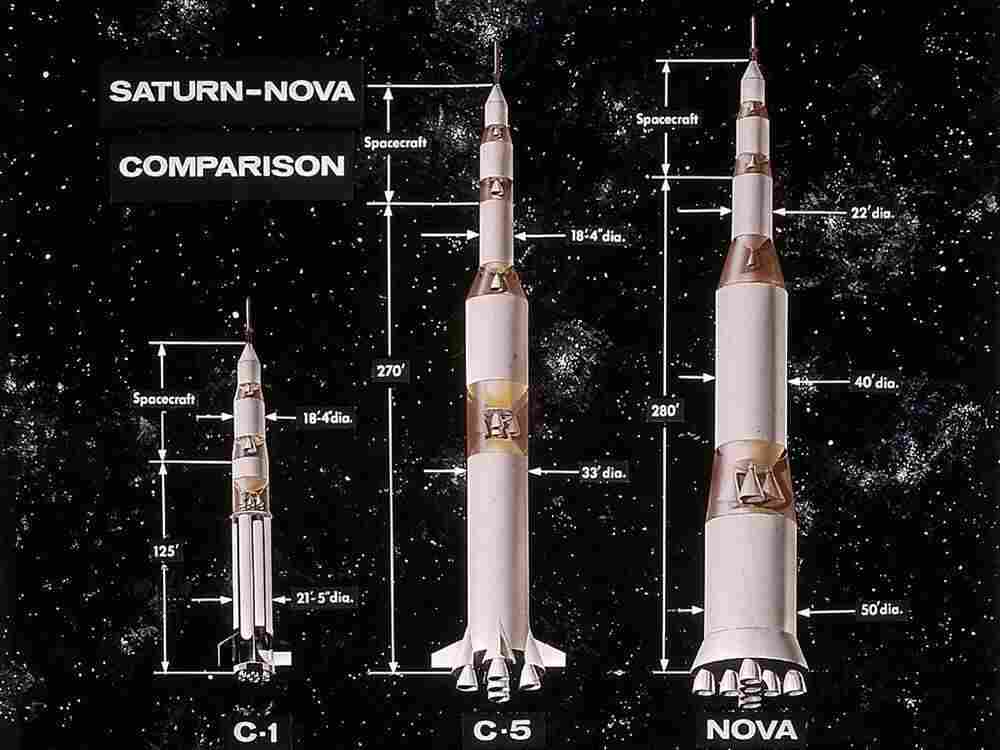 NASA illustration comparing configurations of what would become the Saturn 1B and the Saturn V with an even larger rocket, the Nova, which was never developed.

The bottom line, according to Launius: “There was no way to do [direct ascent] within the time frame that Kennedy had set for the landing.”

A second camp, led by von Braun, liked another option — something called Earth orbit rendezvous, or EOR. It was essentially a variation on the direct ascent theme. EOR involved the same giant vehicle to go to the moon and required two or more Saturn Vs to launch the pieces into Earth orbit, where astronauts would assemble them, using a space station as a base of operations.

EOR “enjoyed strong support inside of NASA,” according to a fact sheet put out by NASA in 1992, “especially among those who recognized that [its] selection … would require the virtual construction of a space station, a platform in Earth orbit that could have many other uses, scientific and otherwise, beyond Apollo.”

Von Braun had long dreamed of a space station, and as the debate grew louder, he held tenaciously to EOR, Launius says.

There was also a third way — a dark horse candidate favored by a minority of engineers led by Houbolt at NASA’s Langley Research Center. Lunar orbit rendezvous, or LOR, would require only one Saturn V and two smaller vehicles to go to the moon — a mother ship to stay in lunar orbit, which came to be known as the command module, while a lightweight lunar module, designed solely to land and return from the lunar surface, made the descent.

The catch? Astronauts, circling the moon nearly a quarter of a million miles away from any possibility of rescue, would have to link up the two spaceships to get home.

To the NASA establishment, that sounded way too risky. Nearly all but Houbolt and his group of supporters at Langley dismissed it out of hand.

At the time, no one had ever done rendezvous or docking in space — maneuvers that are considered the bread and butter of spaceflight today but that were daunting and untried concepts in the early 1960s.

“If rendezvous had to be part of Project Apollo, critics of LOR felt that it should be done only in Earth orbit,” according to the NASA fact sheet. In case the maneuver was unsuccessful, the astronauts could easily return home. However, “if a rendezvous around the moon failed, the astronauts would be too far away to be saved. Nothing could be done,” it said. 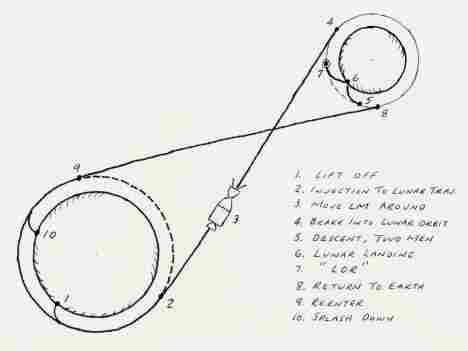 Houbolt believed the risks of LOR were manageable. And further, he was adamant that a rendezvous of two spacecraft in lunar orbit wasn’t just one possible method for a moon mission, but the only one that had any chance of meeting Kennedy’s nearly impossible deadline.

To Houbolt, it was a simple equation involving the need to save weight, time and money. Lunar orbit rendezvous accomplished all three. But despite the obvious advantages, Houbolt faced an uphill battle. “He got batted down by pretty much everybody,” Launius says.

There was von Braun’s opposition, but also vehement pushback from Faget, the Mercury capsule designer.

In one meeting attended by NASA Associate Administrator Robert Seamans, von Braun and Faget, Houbolt pitched LOR. After the presentation, Faget rose from his seat to denounce Houbolt’s plan.

“His figures lie!” Faget proclaimed. Amid a stunned silence in the room, Faget added, “He doesn’t know what he’s talking about!”

The outsider gets a hearing

His idea for getting to the moon may have been roundabout, but Houbolt himself was direct. He was also an outsider among the group of engineers studying a moonshot.

“Houbolt was not part of the program, and that is really where a core issue comes into play,” Launius says. “He went to his boss and his boss sort of shouted him down and said, ‘What are you doing?’ because he wasn’t working in this area at all.”

Frustrated with his inability to get anyone to listen, in November 1961, Houbolt wrote a letter to Seamans, essentially going straight to the top of the NASA hierarchy. The move was a breach of protocol that Houbolt acknowledged in the letter was “somewhat unorthodox.” But, he insisted, “[the] issues at stake are crucial enough to us all that an unusual course is warranted.”

“Do we want to go to the moon or not?” Houbolt asked rhetorically, challenging the administrator to act. “Why is Nova, with its ponderous size, simply just accepted, and why is a much less grandiose scheme involving rendezvous ostracized or put on the defensive?”

The letter got Seamans’ attention.

“It was rather strident in the way it was written,” the former NASA official recalled in a 2008 documentary. “My first reaction was, ‘I’d like some way to get that son of a gun off my back.’ “

In a reply to Houbolt, Seamans promised to put LOR into active consideration.

Despite their differences, Houbolt — who left the space agency in 1963 — was invited by von Braun to mission control in Houston to witness the historic Apollo 11 landing on July 20, 1969.

Amid the exuberance and celebration in the room after the Eagle reported touchdown on the moon’s Sea of Tranquility, “a wonderful thing happened,” Houbolt, who died in 2014, said years later.